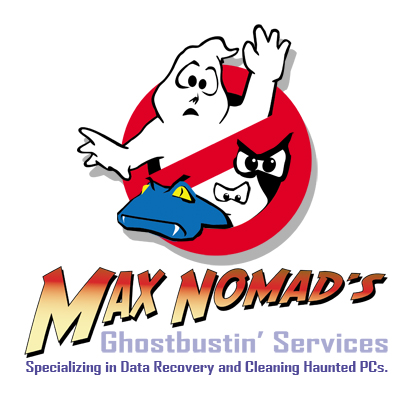 HAUNT (as a verb): To remain persistently; loiter; stay; linger. To visit habitually or appear frequently as a spirit or ghost. To disturb or distress; cause to have anxiety; trouble; worry. 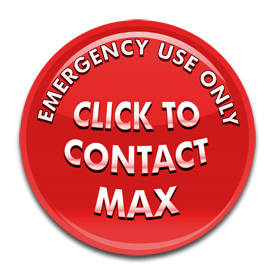 Let’s face it—Cyberspace can be scary… full of swarms of creatures, hostile entities, and bottomless pits. Trojans, Spyware, Viruses, Identity thieves and other cyber criminals can haunt us better than any ghost. And while Max Nomad is known as an accomplished Graphic Designer, he leads a double life as a retired-Hacker / Geek for Hire. The phrase Ghostbustin’ best describes his brand of select IT services because people usually call on him for one main reason: to fix catastrophic computer problems or network infestations that border on needing an exorcism.

* Extended scanning and transfer times totaling more than 60 minutes will be subtracted from your final bill.

If you need someone to hook up a printer or your iTunes isn’t working properly, take it to your neighborhood geek.

If evil things have hijacked your computer or network, call Max.

Here are comments from a few people that Max has rescued:

“My PC was running slow so I tried to delete some things. That made things worse. I found my System Recovery CD so I put it in, thinking it would fix everything. Instead it messed up Windows, all my programs disappeared, and it erased everything I ever saved, including my family tree photos... thousands of them, some were irreplaceable because the originals were lost when my house flooded from a pipe burst. I was devastated and ready to buy a new computer when a friend gave me Max's number. It took him awhile but he was able to get everything working again and bring my photos back. [My PC] even backs up onto a USB external now. Max is brilliant and a joy to work with!”

“My daughter told me we could download music using a site called Limewire so I installed it on her computer. A week later her PC was crawling with viruses and pop-ups and it jumped across the network to my Dell laptop. I manage rental properties, and my laptop is my bread and butter. My neighbor swears by Max so I called him instead of [the competition]... and I'm glad I did. He did a thorough scanning and cleaning of every PC in the house and made my wireless router secure. All the problems were caused by infected songs downloaded from Limewire. After he finished he said we should stick to iTunes. :-)”

“I went through hell when my laptop locked up. It practically had my life in it... Outlook, personal finances, photos of my kids. All kinds of files I couldn't replace, including info related to my upcoming retirement from the Navy. Customer support said it sounded like the laptop was fine but the hard drive went bad; they could replace it but I'd lose all my files. An IT guy on base tried a few things, nothing worked. When I called [the competition] they wanted to charge over $200 just to plug in my laptop and take a look—before any attempts to get my files. When I talked to Max and answered some questions, he was confident that he could help. He refused to accept a dime unless he did at least a partial recovery. After everything I'd already been told, I honestly didn't think he could do it. Make a long story short, a few days later he handed me an external hard drive with ALL MY FILES on it. Everything... even files I'd forgotten about. And he charged much less than [the competition]! Now, I keep Max on speed-dial in case of [PC] emergencies.”

“No matter what I did to get rid of the virus it kept coming back until it froze up my Internet and Windows couldn't shut down. Some fake anti-virus program had installed itself, claiming my machine was infected with a bunch of Win32 viruses and trojans... and I'd have to buy the full version to remove them. I went to Craigslist to find a tech guy, saw Max Nomad's Ghostbustin' Ad, and called on him. The next day when I got my laptop back everything was lovely, clean like it was brand new. He did a great job!”

“I'm a commercial insurance agent that works out of the house. Most of my key accounts are restaurant chains that I've had since the 80s. All their records have been handled by the same program since the MS-DOS days and once that company was bought out, the software was no longer supported. For those clients I've been stuck using software that can't run on anything newer than Windows XP. Max is my "Go-To" computer guru because he understands my situation and still manages to keep my computers as current as possible. He also helps me come up with ways to use what I've already got to streamline what I do to save time and money. When it comes to handling my accounts, that savings makes a big difference.”

“Since I'm very retired, I don't keep up with the latest computers but I still use mine often. When my Internet started acting up, a soro[ity] sister referred me to Max. Shortly after he got started he discovered someone stealing Internet access through our wireless. After he locked them out and fixed that hole, he cleaned up over a dozen [spyware and malware] problems and other [trojans] that infected my computer. What I like most is the way he works. His calm attitude makes the unknown easier to deal with. He also takes time to explain everything in a way that makes sense to my son and I. When it comes to this kind of stuff, Max is the kind of man you want in your corner.”

“I do not know the Internet. When I tour the United States to visit [Karate schools] in our association it serves a big part of keeping my national schedule. We had notebook problems while [in] Virginia Beach and were fortunate enough to meet Max. He fixed it all [removed viruses and installed security], and introduced new ideas to expand our presence on the Internet. He is a credit to your countrymen.”

“In our office, when I took over as director I inherited the former director's PC. It was central to the network so when it crashed, everything went crazy. We couldn't get online, no email, and almost 10 years of accounting and other sensitive files were lost. Max got us back online, expanded our network to wireless, recovered all the lost files off the old director's computer and then rebuilt it to run better than when it was brand new, and set up online remote backup. He did a magnificent job and I'd recommend him to anyone!”

“My husband and I aren't computer people..... so it was no surprise when we ran into problems trying to add wireless to our home office. We spent hours on the phone with Verizon DSL and Netgear support and they were no help. Once we brought Max into the picture he found a mess of spyware, viruses and [Windows XP] problems that had brought our connection to a crawl. In half the time we spent on the phone he fought to clean everything up, got all the computers on the wireless, and made sure our network was secure. Believe me when I say Max is the MAN!”

If you’ve got a PC Emergency and need fast assistance, type in your name, phone number and details below then click SEND.

Your alert will get a call from Max (or an intern) as soon as possible to schedule a time to make a repair visit. All other non-emergency inquiries should be sent through the BGP Contact page.

Phone:
757-672-2112. NOTE: To keep costs low, there are no receptionists here.
Unwanted solicitors will be mercilessly taunted.