On some other websites I’ve encountered a great deal of static about my comments on POD Publishing Services like Lulu, PublishAmerica and so forth. Simply put, the debate is whether or not it is possible to profitably grow a title through their services instead of the regular self-publishing method.

The short answer is “No”. The math doesn’t add up.

Here’s some math to uphold the regular self-publishing side. To backup the profitability claims of an author’s title produced by Lulu, Xlibris, PublisherAmerica, or any similar Author Mill or modified Vanity press I welcome and encourage anyone else with spreadsheets to post their numbers.

Granted, after some provisions and G&A is taken out, there’s only $1,198 left (about 19% to contribute to profit). This means you’ve already got the money to flip for the next print run of 500. The $1,198 you can either pocket or turn around and flip right back into some aspect of the next print run. Since we’re going to assume that there’s no need to recreate anything for the next 500 unit print run I didn’t bother to make up another chart. If you subtract the cost of production and do the rest of the math you’ll see that at the end of selling the next 500 copies you’ll net a 39% profit of $2,498.

Short of any major changes to the book materials, the printer, and other expenses (marketing/advertising, G&A, etc), this is a rough approximate of what a self-publisher could expect to earn on the title with each 500 unit print run.

NOTE: It is in the COGS (production) expenses that can be amortized over time to allow for growth without affecting how much can be invested in the next print run. For the sake of this example, I’m figuring that the production cost will be completely covered with this print run.

*** Both charts focus solely on direct to consumer sales and do not include other sources of income from Trade and Commercial Accounts. For the self-publisher, there are also line items that could have easily been removed but I left them in, mostly to show how these numbers can handle all sorts of expenses and still come out profitable. 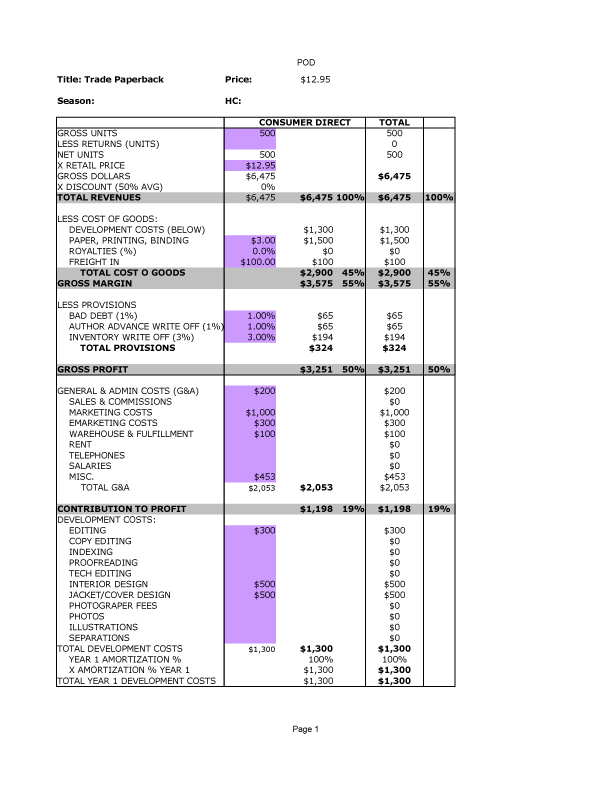 Now, the following numbers are on the premise that things have grown to a point where it’s time to jump from POD to offset printing press. Same book, higher print run (10,000 units), lower cost per unit. I’m using $1.50 as a rough average; the only way I could include a set price would be to get quotes from several offset book printers.

Admittedly for this illustration I didn’t bother to recalculate some things like marketing expenses, freight, warehousing and one-time offset setup costs, but there’s still enough data here to more than present the case for self-publishing versus using one of the vanities.

NOTE: It is in the COGS (production) expenses that can be amortized over time to allow for growth without affecting how much can be invested in the next print run. For the sake of this example, I left in the production cost (figuring that the layout would have to undergo some modifications for offset printing). I also left it in so the production cost will be completely covered with this print run and unnecessary in following print runs… 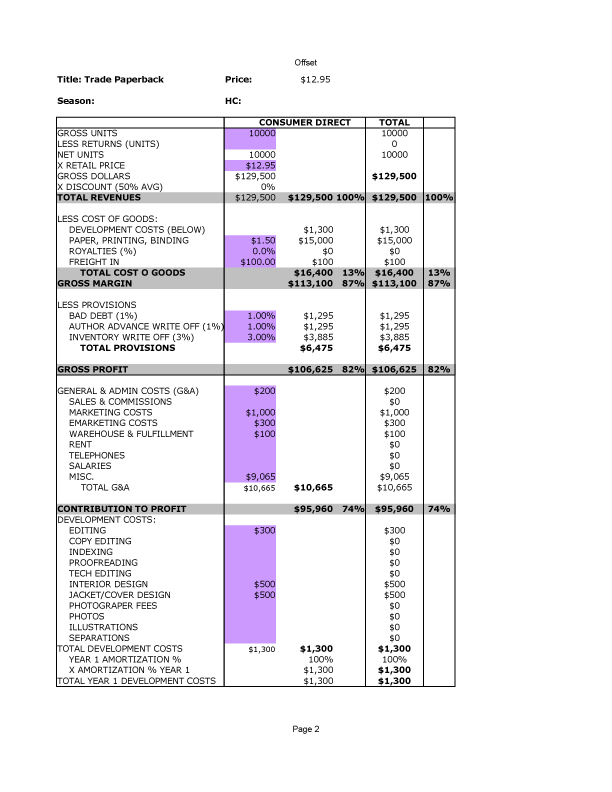 Figuring in freight and/or warehousing costs (which weren’t accurately reflected in the spreadsheet), we’re still looking at somewhere between 60-75% profit for a self-publisher / small-publisher, huh?

Like I said from jump regarding my comments about Lulu and the Vanities — it wasn’t my opinion. The Math speaks for itself.

...is an IT Consultant, Graphic Designer, creative entrepreneur and computer security researcher (i.e. - reformed computer hacker) with over 20 years of experience using Internet technology to assist (and protect) small businesses. Having worked with everything from stock brokerage firms to car dealership chains to ostrich farmers, his diverse client history has given him experience with a variety of large and small business needs. He also writes candid and informative essays focusing on publishing, graphic design, social commentary and offbeat life experiences.